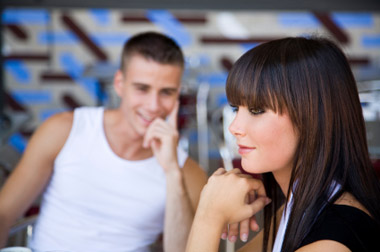 Since most gals give subtle signs of flirting, it’s important for a guy, especially if they’re love shy or lacking in confidence, to know he has a fighting chance of dating them, and not face rejection. Quite frankly, the fragile male ego would have a hard time with this.

Men, the following signs of flirting will help you how to tell if a girl is flirting with you. However, there are a few flirting tip disclaimers here.

First, they taught us in seminary never to build a theology based on one Bible verse. Likewise, great care needs to be taken here not to get too excited when you observe just one sign of flirting in a woman. What are we saying? These signs of flirting should be looked at cumulatively.

Secondly, make observe how the single girl of interest treats other men around her. If she treats everyone the same way, she may just have a flirtatious personality, and not necessarily have any special feelings for you.

Well, without further ado, here are some of the top signs of flirting some of our readers have come up with:

She repeatedly glances in your direction

Say your in a christian singles group. Is she looking your way everytime you take a peek her way? Pronlonged eye contact is a pretty stong sign of flirting. Just look behind you to make sure she’s not spying some other hunk sitting right behind you!

She goes out of her way to “bump” into you

My one friend met his wife this way. She always found a way to cross paths with him, even if she had no reason to be in area.

You keep seeing that smiling face

If a girl is frequently smiling at you , it’s a good indication that she enjoys hanging around. Smiling back at her will disarm any fear she may have about pursuing the matter.

She laughs at your stupid jokes

This is a good indication you have her interest, but just go easy on the one liners. 🙂

She approaches you in conversation

A sure-fire sign of flirting, this also means she is not the shy type. Warning: Now that you have her attention, don’t blow it by not knowing how to keep a conversation going strong.

She gives you a compliment

Since deep down most men are really insecure cravers of attention , women interested in dating would do much better if they threw more compliments a guy’s way.

Body language is a powerful tool women use when flirting with a man, and most know how to use this flirting sign to their advantage. Social scientists tell us 97% of communication is nonverbal in nature, so it’s very important for a guy to catch some of these signs of flirting:

Overall, learning the above signs of flirting is only the first step toward successful dating. The next step includes facing any fears you may have about actually reaching out and asking the single girl out.

Are you a Christian single who wants to share other signs of flirting, flirting tips, or a different take on flirting altogether?